Home » Talk to an emergency plumber about rusty water pipes – it’s more common than you think!

Talk to an emergency plumber about rusty water pipes – it’s more common than you think!

So you’ve come home. The first thing you might want to do is take a nice, refreshing shower to wash the day off – it’s almost summer, after all! You turn on the tap and let the cold water wash over you.

But then you notice something. The water… is it… brown?

If this story sounds all-too familiar then your home may be suffering from rusted water pipes.

Dirty water triggers an almost instinctive gut reaction in most of us. And to think: just the other day, you were using this water to wash, to do the laundry… to drink… 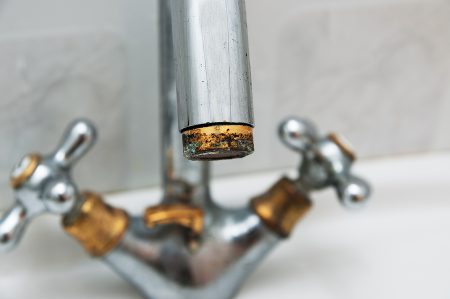 Before you start panicking, you may be surprised (and relieved) to know that while rusty water might taste and look foul, in most cases, it is relatively safe to consume!

It certainly goes against our gut instincts. But as we discuss later, rust is essentially just iron, a compound you already ingest every day! With the exception of hemochromatosis sufferers – a rare disorder that causes iron overload – it is not a health concern for most.

That said, even if your health might not suffer from drinking or washing yourself with rusty water, we don’t recommend getting used to it. In the interim, it’s a good idea to boil your rusty water or flush your taps for a few minutes before using any of the water that comes out.

Here’s an even better idea, though: call an emergency plumber for solutions that’ll fix your rust problem!

What can an emergency plumber do for me?

We’ve established that drinking and using rusty water is generally safe, but if your water’s coming out brown, call an emergency plumber anyway!

Because even though rusty water may be safe, rust is a symptom of corrosion in your old, metal water pipes. Today, it may be just rust, but what about tomorrow? How about a burst pipe?

While you might think it’s unlikely that something drastic will occur so soon, it’s always important to resolve any plumbing issues as they arise instead of putting them off as a job for tomorrow.

Don’t wait for a minor problem to become a major disaster – call your plumber now can save you from sinking a significant amount of money further down the drain!

There are a number of things a plumber can do to return your water to its clear, natural state:

And even if your pipes are fine, save our number, just in case – you never know when you might need us!

You mightn’t care too much, but it’s important to understand why rust is often prevalent in plumbing:

Rust occurs in iron and all its alloys – steel, nickel, corrode. Any metal that contains iron as part of its makeup is susceptible to rust.

While nowadays the majority of piping is either ceramic or PVC, in many older homes, the water and piping systems are still made of metal pipes, making older homes more susceptible to rust.

What should I do?

So you have a rust issue. You’ve called an emergency plumber and help is on its way.

But you still need water to drink and wash! What can you do in the meantime?

In the short term, we suggest letting the water run and flush out any rust that’s settled in your pipes overnight. While it won’t fix your rusty pipes, at least your water will clear up, if only temporarily!

Another thing you can do while you wait for a plumbing professional is determine whether or not the source of the problem is your own plumbing or the water main.

Is your hot water system in hot water?

Here’s a test: turn on your hot water and let it run.

Now do the same, but with your cold water.

If only the hot water produces rust, it’s a sign that your hot water system could be the culprit in your rust problem, and may need maintenance or replacement.

Hot water systems are particularly susceptible to rust build-up – not only does a lot of water pass through it every time you take a steaming shower, but it’s hot water too.

Like we mentioned above, moisture and heat are two factors that can dramatically speed up the rate of rust. Even with its protections, your hot water system is essentially a magnet for rust… so it’s only a matter of time before it eventually starts pumping you rusty water.

That’s why we strongly recommend getting your home’s hot water system checked up every ten or so years.

We’ve talked a lot about how your pipes and your hot water system are the most common culprits when your water starts coming out rusty.

But it’s not always the case that something’s wrong with your pipes!

Here’s another test: let your outdoor tap run. What colour is the water coming out of it?

If the water coming out of your front yard tap is noticeably clearer in quality, it’s a sign that the issue is coming from the pipes within your home or your hot water system.

However, if the front yard tap also produces a noticeable colour, it may be time to get on the phone with your local water authority.

At Watermaster Plumbing, we have a range of water filtration systems for your taps to filter out contaminants in your water – including rust – so you can enjoy clean drinking water in the meantime… and even after your water main is repaired!

Clean water is very important in our lives. Whether it’s rusty pipes or something else entirely, if your taps start giving you discoloured water, make sure you call an expert emergency plumber to get it checked out.

If this sounds like you, get in touch with the experts at Watermaster Plumbing.

Based in Melbourne’s Bayside area, our emergency callout service delivers prompt, reliable and quality plumbing solutions from Melbourne’s CBD all the way down to Mt Eliza. No matter your neck of the woods, we’ve got you covered! Call us now!