Home » Causes, symptoms and fixes for burst pipes – an emergency plumber explains all!

Causes, symptoms and fixes for burst pipes – an emergency plumber explains all!

When it comes to plumbing problems, few are as severe as burst pipes.

You can live with a leak, at least for the short-term. Likewise with hot water problems. And while low water pressure is a problem, at least you still have water!

It’s a lot harder to live with burst pipes, however.

Burst pipes can cause massive damage. There’s no way around that – just think about how much water you use in a typical evening.

Now imagine all of that water not coming out of your taps, but instead flooding out of a burst pipe in your ceiling or walls.

Needless to say, that volume of water building up in your walls and ceilings causes a range of problems!

Suffering from burst pipes? You need an emergency plumber – stat! Call the Watermaster team now for our rapid-response services across Melbourne.

What types of damage can be caused by a burst pipe?

For starters, there’s the risk of indoor flooding.

With that comes soaked furniture, ruined carpets and warped floorboards.

Not only is this inconvenient, but it can also be dangerous if water comes into contact with electrical appliances.

The majority of rooms in your house will already have the first two ingredients – what a burst pipe does is introduce the third, creating the perfect environment for mould and mildew to grow.

In addition to mould, a humid room with stagnant water can also attract pests like mosquitos.

Needless to say, neither option is ideal.

It can even have disastrous consequences for the health of your family, customers and employees – especially if anybody suffers from respiratory conditions like asthma.

By far the most terrifying consequence of a burst pipe however is the risk of structural damage. Water damage can cause walls, ceilings and supports to weaken.

And since these are the things holding your home or business together, any potential weakness could have catastrophic consequences!

Not only can this cause ugly sagging, but it can also put your family members and staff at risk. 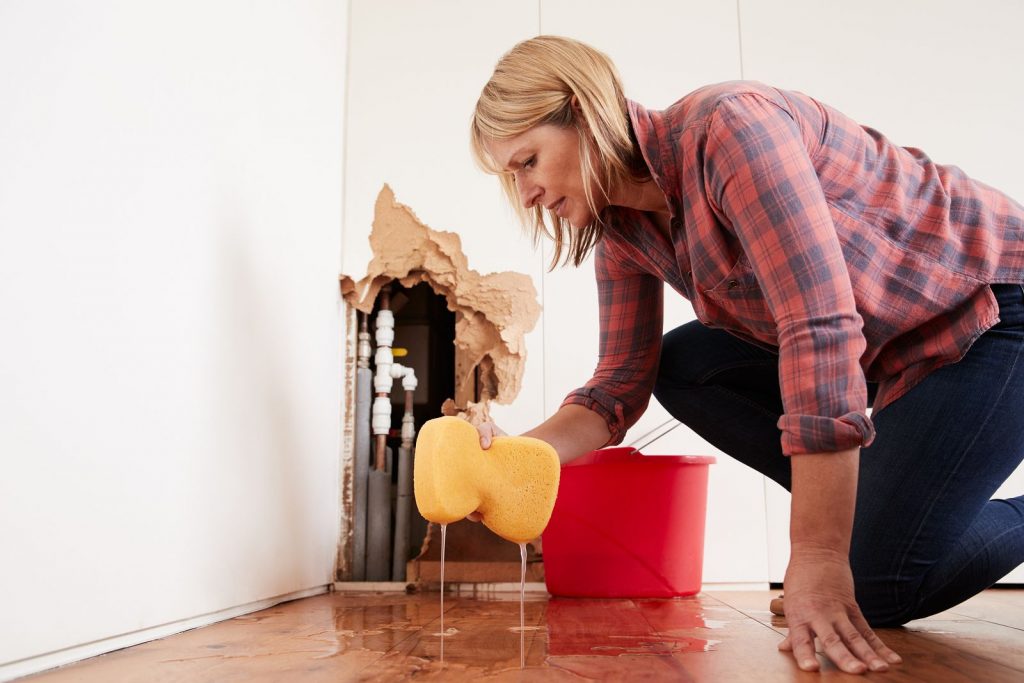 An emergency plumber explains the common causes of burst pipes

We always encourage homeowners to check their plumbers’ credentials. And this is exactly why!

Whether it’s a botched installation, corner-cutting, or low-quality materials, shoddy workmanship is one of the most common causes of a burst pipe.

Find out how Watermaster Plumbing aims to smash the typical plumbing stereotype in this blog post.

Blocked pipes don’t just slow down the flow of water – they can cause pipes to burst if left for too long!

A blockage can cause pressure to build up on the other side of the clog. This pressure builds up in your pipes, causing them to expand until they eventually burst.

It’s imperative you get any blocked pipes unclogged, ASAP!

Sometimes it doesn’t take a blockage or a dodgy plumber to make your pipes burst. It might just be that your pipes are reaching their use-by-date and need replacing.

Whether it’s a small hole or a catastrophic failure, the potential consequences can be dramatic. Organise a plumbing inspection to evaluate whether your pipes are in need of replacing anytime soon!

Get to the root of the problem… literally!

It’s not just your inside pipes that can burst. Your external piping can also give out under the right conditions.

On top of the usual suspects, external pipes face an additional threat from mother nature. In particular, tree roots are a common cause of burst exterior pipes.

Your pipes are tough – and so is nature. Tree roots often force their way into exterior pipes through the tiniest of cracks.

In here, they thrive, eventually leading to partial or complete blockage, causing flooded gardens and hampering the flow of water in and out of your home.

Click here for a list of particular trees and plants you should avoid planting too close to sewer pipes.

Sure, you can call an emergency plumber to repair or replace a pipe when it bursts.

If you ask us however, the best way to minimise the damage to your home isn’t to be reactive.

During a plumbing inspection, your local plumber will go over the entirety of your home plumbing. They’ll be able to identify problems and determine their severity.

Best of all, your plumber can also offer, when applicable, on-the-spot fixes for any issues they uncover!

Suffering from a burst pipe? Call an emergency plumber!

Do you live in Melbourne’s south-east suburbs? Has your home or business fallen victim to a burst pipe?

If so, get in touch with Watermaster Plumbing now.

Our team of plumbers fix all sorts of domestic and commercial plumbing emergencies. If one of your pipes gives out, call us and we’ll dispatch a highly-experienced plumber urgently.

We don’t just do rapid-response callouts either – organise a plumbing inspection with one of our experts to uncover any potential problems with your home plumbing.